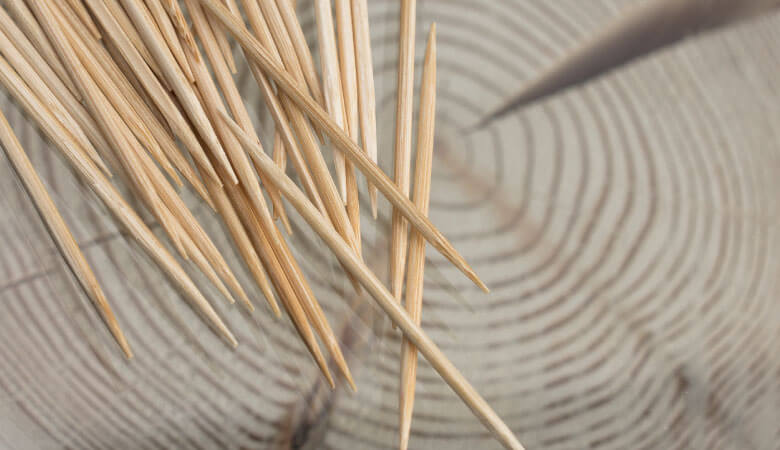 Toothpicks are the oldest dental instruments in the world, and they are still widely used today to remove excess food from teeth.

A Brief History of the Toothpick

All ancient cultures seemed to use some form of toothpick to clean teeth, with some of the oldest examples found in Italy and Mesopotamia. Most were made of hard and soft wood. In the seventeenth century, however, some cultures even treated toothpicks as treasured jewelry items and made them from materials like silver and enamel.

An American businessman named Charles Forster is credited for mass-producing the toothpick in the nineteenth century after noticing the locals’ great teeth on a trip to Brazil (they credited toothpicks for their sparkling smiles). Although it was common to make one’s own toothpick on a per use basis in his native Boston at the time, Forster was a brilliant marketer who was successfully able to get his pre-made toothpicks in stores and restaurants, where you can still find them today.

Believe it or not, the toothpick emerged as a status symbol soon after it became more widespread. Rich men would sport chewing toothpicks in their mouths, perhaps to symbolize that they were able to afford indulgent meals. Young women also adopted chewing toothpicks as a fashion item, which further propelled their popularity.

Toothpicks also have purposes that go beyond teeth. It is quite common to see them as serving tools on cocktail platters or to hold together intricate club sandwiches. Avid bakers also use them to test if their cakes and brownies are ready to cool.

The toothpick is a versatile product that dates back to ancient times. While its primary purpose of cleaning out food between teeth remains, it’s not the only dental product that will help you maintain your healthy smile. Aside from daily brushing and flossing, it is important to get cleanings every six months to maintain optimal oral health and a beautiful smile.